The trouble with noses 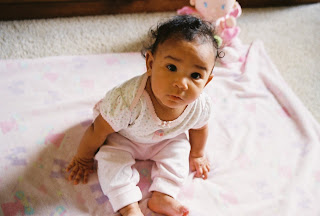 The baby has a cold. Her poor little nose is running all day and night and she is pretty miserable, well for her she is. Luckily Ava is the most happy baby in the world and rarely fusses or cries, so a little fussing and crying isn't really too bad.

She is also teething which also makes for a little fussing...and drooling...and a runny nose. Poor Ava, she's not having a good week. But she still looks so cute! She will be 7 months exactly tomorrow. She is sitting up when you set her that way but is not able to get to the sitting position on her own yet. She is doing the army crawl and can get herself pretty much anywhere she pleases. She sometimes follows my voice into the kitchen, but I don't like her to crawl on the wood floor, I don't want her to hurt those cute little knees or elbows! So I am constantly picking her up and placing her back on her blanket. She thinks this is a game now...and giggles when I come get her and scold her for leaving the designated area. She obviously is not taking me seriously...just like all of my other children.

I thought I would have a pretty relaxing day yesterday...did a couple loads of laundry (I have to do 2 loads a day to just keep up with this crowd!) Started cutting out some dresses for the girls, this will be the first set to include a dress for Ava. Yes it's a matchy-matchy and while a lot of people don't like that kind of thing, I do! I don't have a lot of matching clothes for them, mostly because Katy's clothes come from the junior dept., Mackenzie and Madyson still wear some toddler stuff, and then Ava's in the infant section. So I usually have to make something and, you know I have all-the-time-in-the-world for that kind of stuff! But I really enjoy sewing, so I try to make time for it every couple of months or so.

Anyhow, I didn't have to make dinner because we were going to a neighbors sweet sixteen party and when I called to RSVP I was asked how many of us would be attending "so I can tell the caterer"...this of course was music to my ears! WOW! I won't have to cook on Saturday night...Yea for me! Or so I thought...turns out people now have ice cream and cake CATERED! Yes, really! So by the time we left the party we were all famished and the girls were hopped up on sugar, so I called my son Randy who was not at the party (Can you imagine that my 23 year old son didn't want to attend a Sweet Sixteen party for our neighbors daughter?) and told him what had happened and we picked him up and went to the Cheesecake Factory! Well...we were all dressed up!

It was very nice, the girls were relatively well behaved considering they were now coming down from their sugar high, the baby was happy because there was lots to look at and Randy and I had a nice conversation without too many interruptions. We always order cheesecake and bring it home to eat later. We like to enjoy the dinner without having to worry about "saving room" for dessert. Of course we don't usually order dessert anywhere else except the Cheesecake Factory, which is my favorite restaurant. Can you believe we have 2 of them in Kansas City? And you probably thought there was nothing here in the Midwest except cows and tractors! Well we have a lot of those too, but we also like to eat out a lot. The restaurants here are always very crowded. I remember back when I lived in California, we usually had to wait 15-20 minutes to get seated on a Friday or Saturday night. But here it is not unusual to wait 2-2 1/2 hours for a table...on a Tuesday! Maybe we just need more restaurants!
Posted by maureen at 11:25 AM

Hey Maureen, i just read your comment on Pioneer Woman and thought it was so touching!! It caught my because i live in Kansas, not far from you in Spring Hill!! Your children are BEAUTIFUL!!

Thanks Nicole! I agree! We like to go to Spring Hill to the Farmers Market to get all of their great fresh vegetables.