Hudson and Beckham are 18 months old. 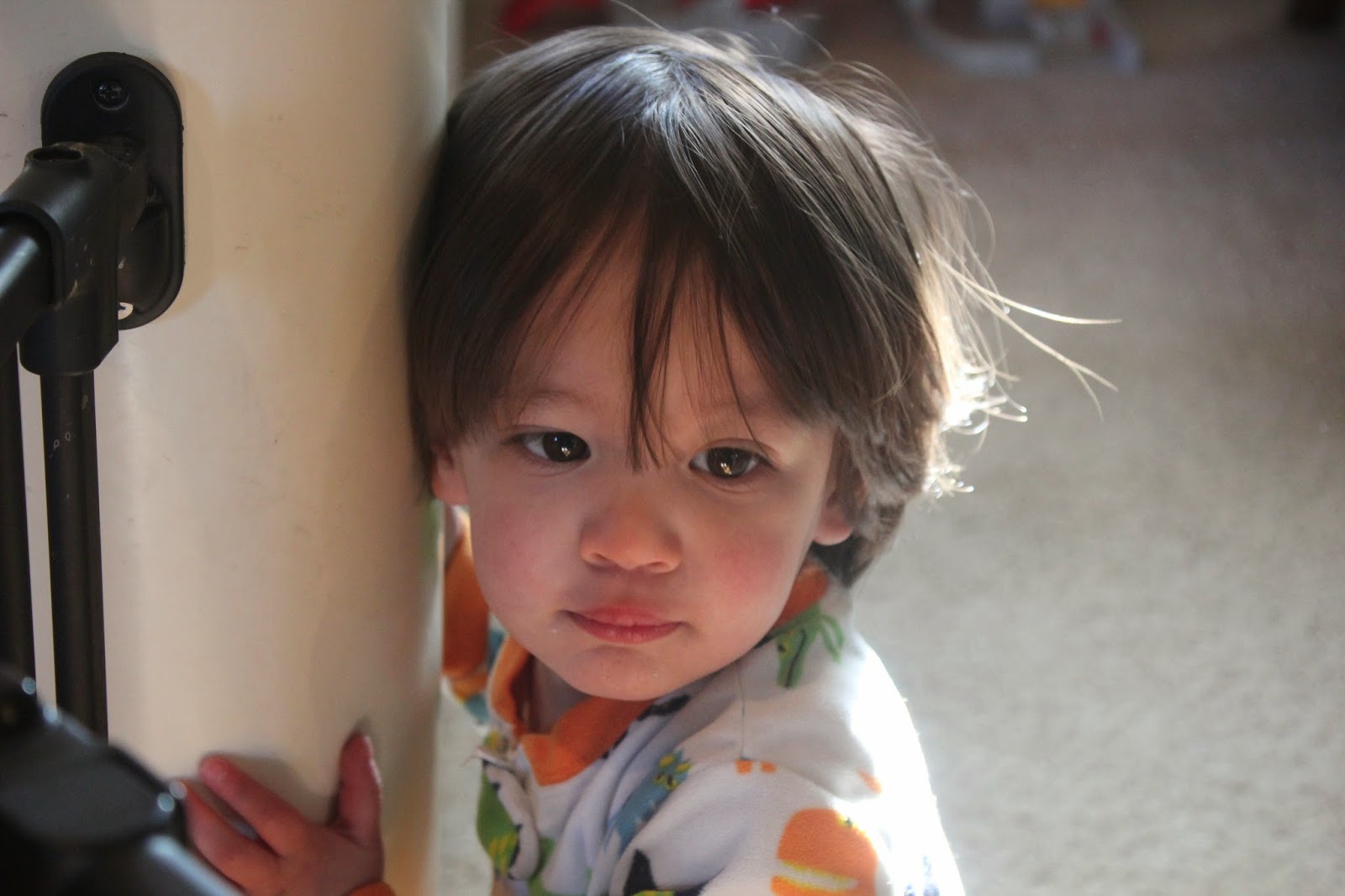 They have beautiful eyes!  Beckham's are always wistful, he is the quiet one.  But you know he is really thinking things through.  Sometimes it is hard to see their eyes.  Lately they have been tipping their heads back to see under the long bangs. 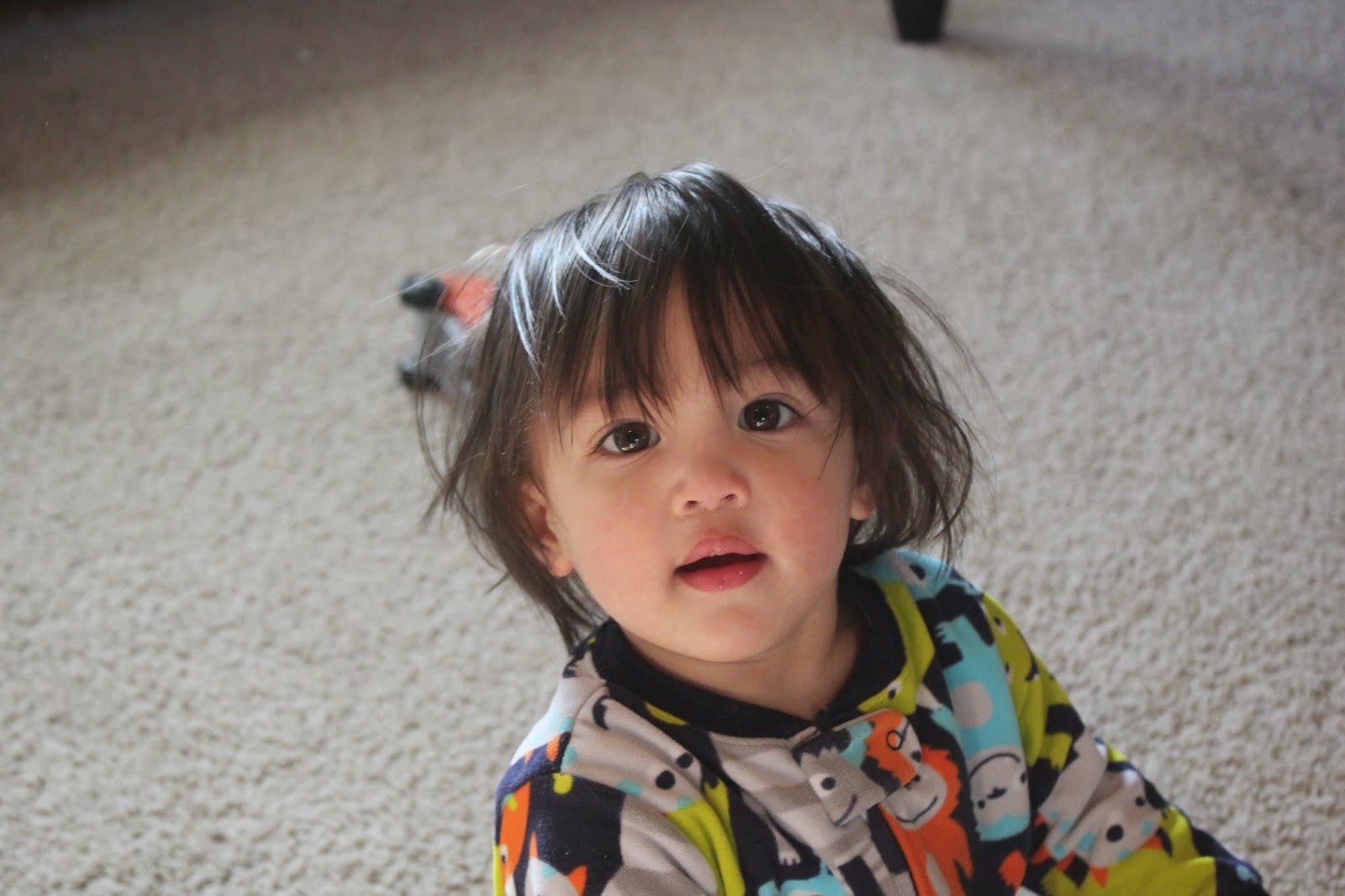 Hudson is always happy and smiling!  He does everything really big!  He doesn't just say words, he SCREAMS them!  He doesn't walk down the stairs one at a time, he JUMPS down each step!  He lives life BIG! 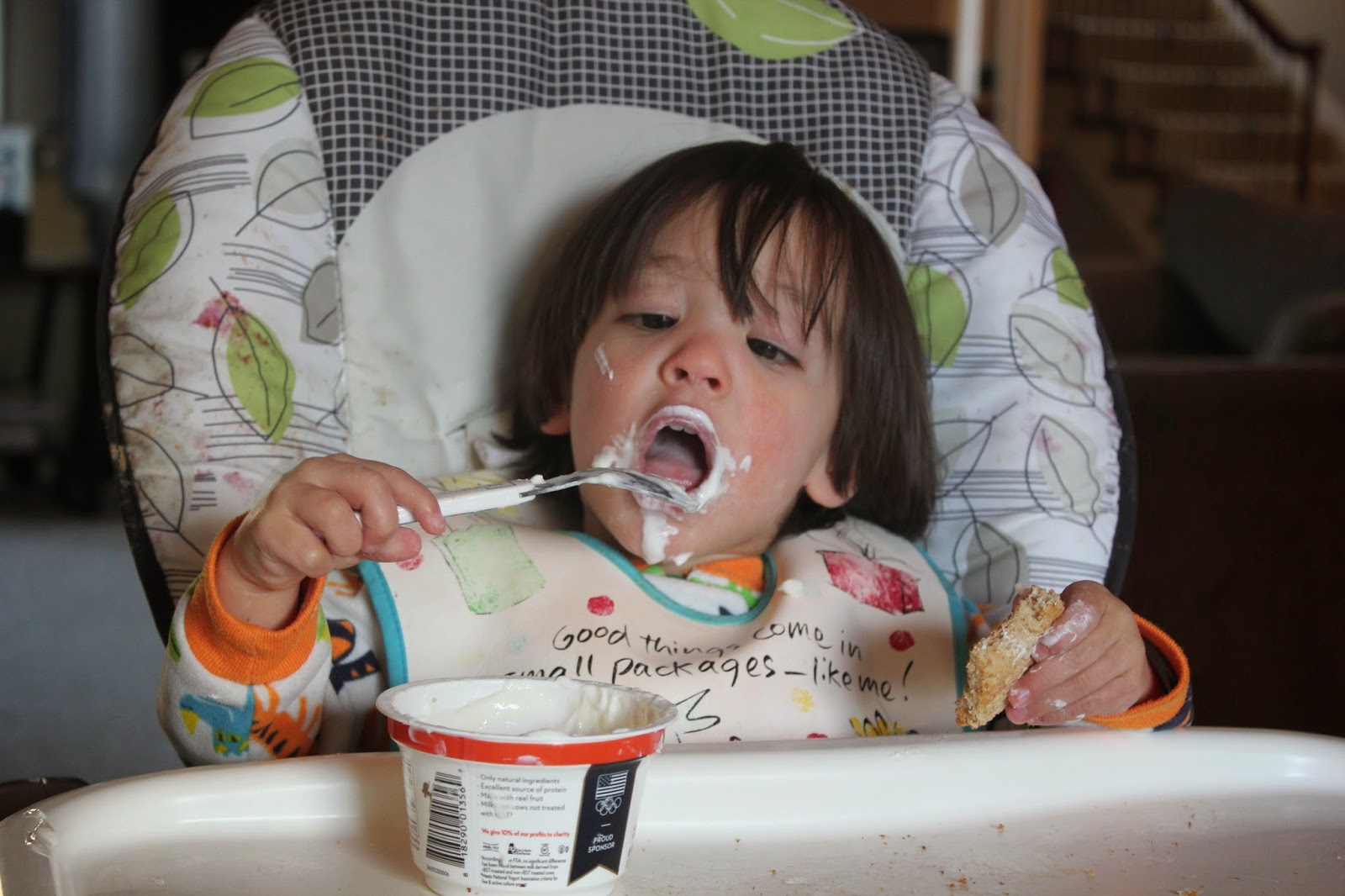 At 18 months old, a boy can feed himself!  He doesn't need mamas help anymore! 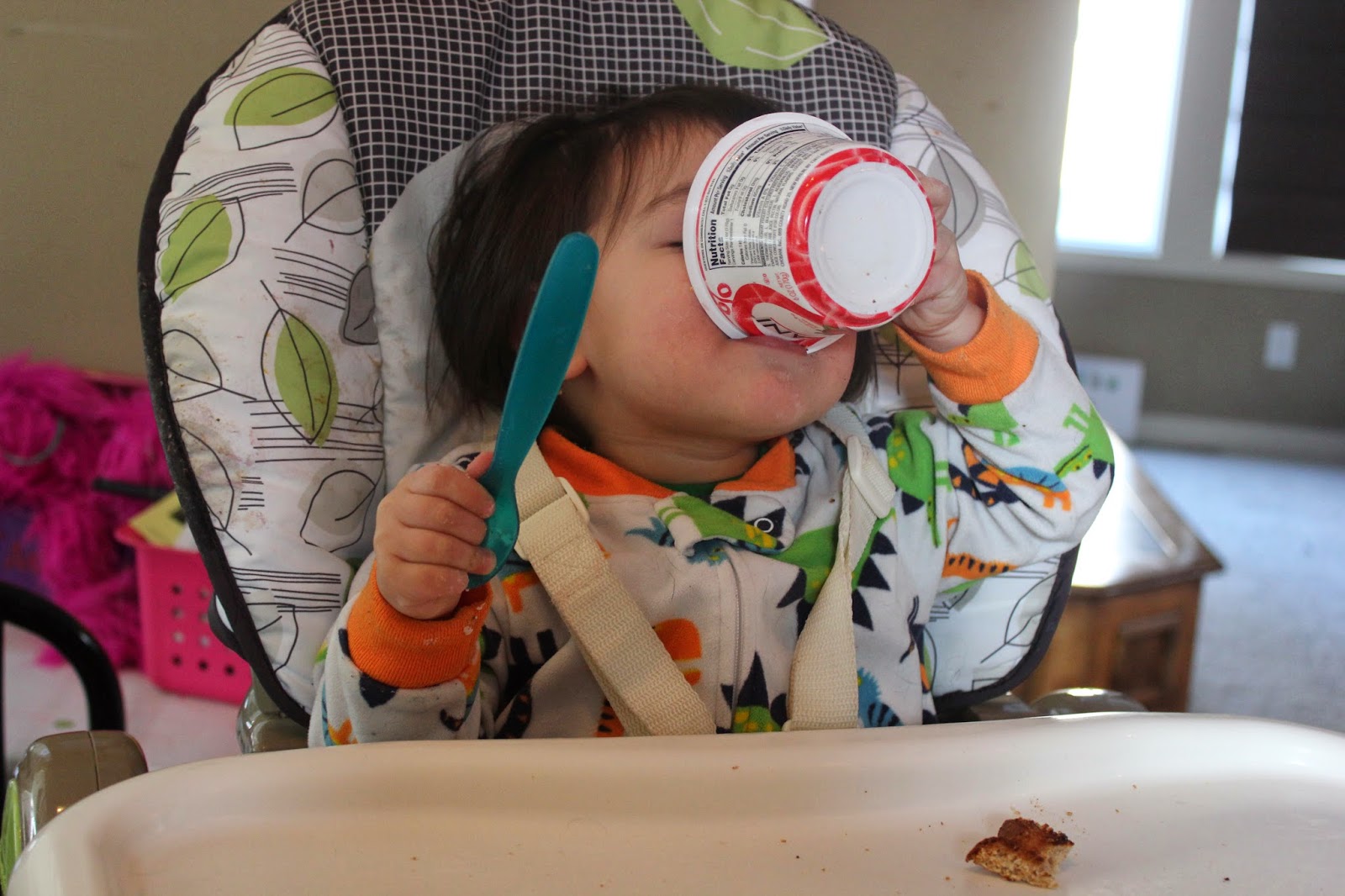 And he can drink his yogurt if he wants to...so there! 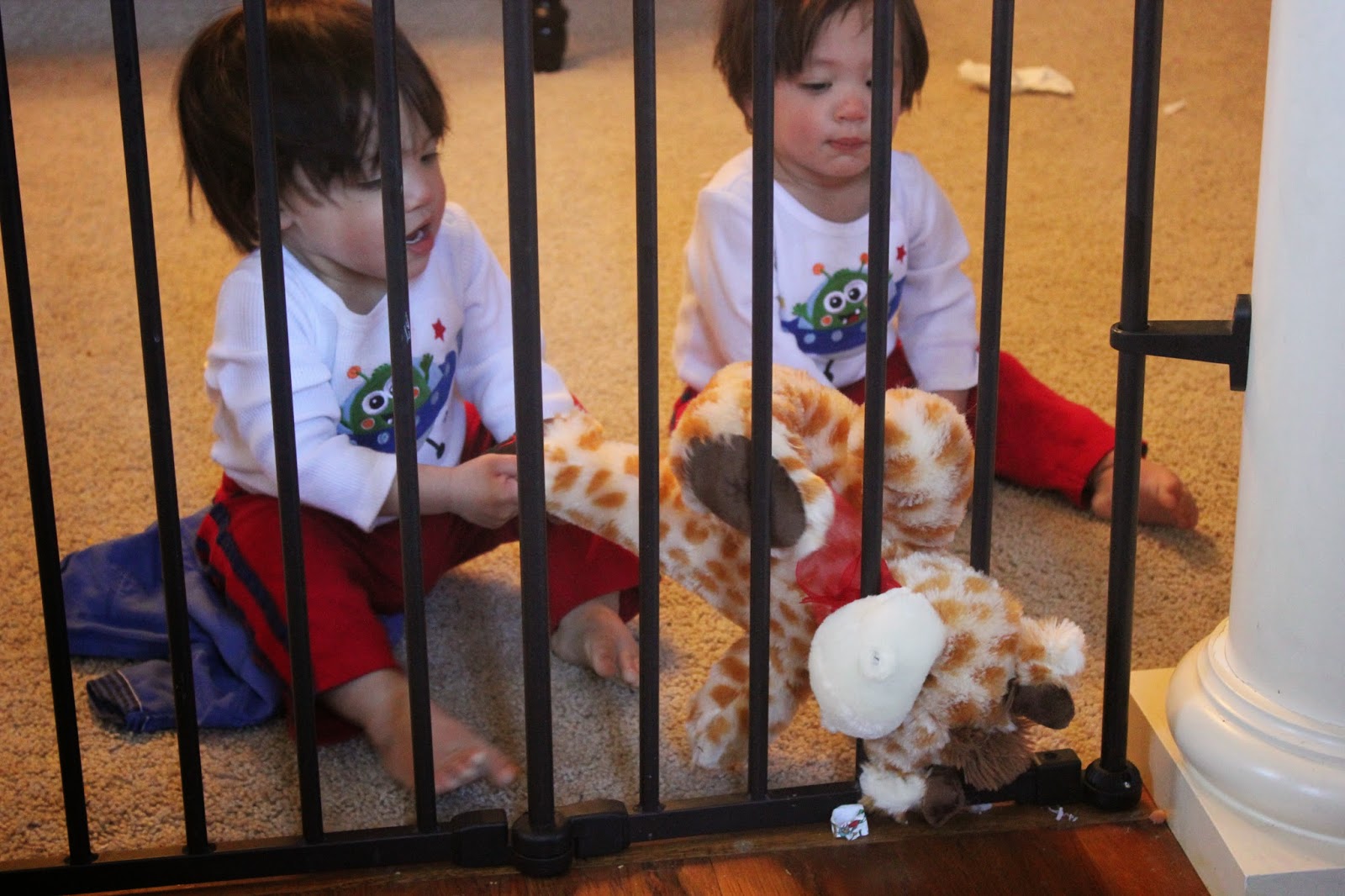 Together they figure out how to get the toy they threw out of their play area back in!  All by themselves!

Of course, it probably helps to have a brothers helping hands!

Hudson and Beckham are both wearing 12 months size in the picture above.  They are getting taller but not too terribly big around.  Hudson has all of his teeth now and Beckham is still growing in his eye teeth.  They wear size 5 shoes and never keep their socks or shoes on in the car!  They are both good aims because Mom has gotten hit in the back of the head with little shoes numerous times!

They say "Bye, nana (for banana), hey, yum, Oh, uh-oh, dog, mama, bubba (word for brother)."  They do not say any of the sisters names, but point them out in pictures or in person when you say one of their names.

If I show Beckham a picture of both he and Hudson and say, "Where is Bubba?"  He points to Hudson.  If I say where is Beckham?  He points to Hudson also!  Of course, he doesn't look in the mirror at himself very much, so he would think that he looked the same as his brother.

When I pick up Hudson, he hugs me very tightly.  Beckham pats me on the shoulder and snuggles under my neck.  Both boys are so loving.

BUT...if they are fighting with each other...Beckham pulls hair and Hudson bites!  Luckily, they also know when they have hurt the other that they have to hug and say sorry..well we are working on that still!

We had to take all of the chairs and the little kitchen out of the play area if no one is in there with them, because they use them to climb up on the table.  Hudson has started using his arms to pull himself up onto the table.  Several times I have been in the kitchen and walked over to check on them and found one of them standing on the table!

They think it is funny...I am getting frustrated!  BOYS!

It doesn't feel like 18 months have gone by.  Thank you Lord for little boys.  They remind us to live and love BIG!
Posted by maureen at 11:15 AM