And here is our little Hudson! 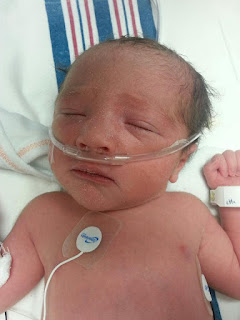 Hudson is still in the nicu but he is doing great!  He was breathing really hard and fast and they just wanted to give him a break and make sure he didn't "crash".  So they are giving him just a little extra oxygen.

He also has an IV because birth mom tested positive for the Group Strep B virus, which is totally common and about 50% of women have it.  Usually, the mom is given a shot and it takes affect within about 15 minutes, so there is no danger to the baby.  But Hudson was born within minutes of her getting the shot, so the doctors were concerned that he may have been exposed.  Just a precaution, we will know by about 4pm today.

If he is, then they just give him antibiotics in the IV and he will be fine.  If he does not have it, the IV comes out and he joins his brother in the regular nursery!!  I am praying for the latter! 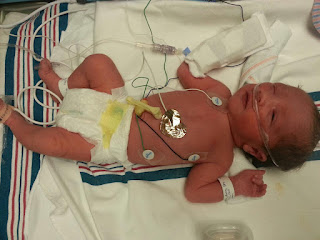 Is such a little peanut!  But he really looks like a fighter.  I can not wait to cuddle and love on him.  Oh...this mamas arms are aching to hold her babies!!
Posted by maureen at 8:30 AM