You know those movies where they start out with something really dramatic happening really fast and you aren't really sure what is exactly happening until the screen all of a sudden goes dark and the words...FIVE YEARS BEFORE or 15 YEARS AGO flash on the screen and you know now you will finally be brought up to speed?!!

Okay, that is what I am going to do here right now!  Because believe me, SO much has happened in the last 6 weeks, I really need to just back up and start at the beginning.

On Sunday, September 2, 2012 our sweet little baby boys were born.  Hudson was born at 12:15pm in a regular delivery.  He weighed 4 lbs 13 oz and was 17 inches long.  His Apgar scores were 9 and 9, which is awesome.  But after a couple of hours he was struggling with his breathing, too rapid and so he was put in the nicu on a little oxygen. 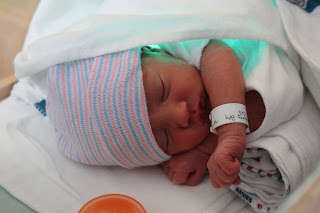 Hudson's twin brother, Beckham was born at 12:35pm via C-Section.  He weighed 4lbs 5 oz and was 17 inches long.  His Apgar scores were 6 and 9, but the second one is the most important.  He was really healthy, thank the Lord! 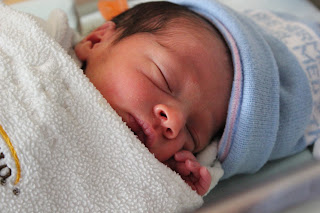 These pictures were taken after we arrived in North Carolina.  Hudson was on the special blanket to help with jaundice.  He had to stay in the hospital 2 extra days until his bilirubin numbers went down.

So...after we got the call that the boys were born we started to make our plans to get to them.  I wanted to bring all the girls with me so we could experience this as a family, which I am really glad I did!

On Wednesday the 5th we headed east toward Charlotte! 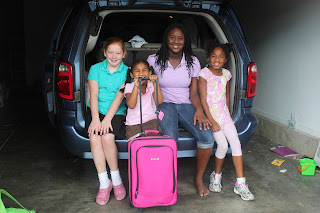 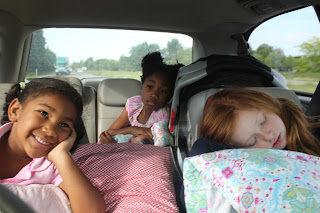 The girls watched a lot of movies and we sang and played car games.  We drove from Kansas City to St. Louis where we stopped for lunch at a McDonalds and the girls played and stretched their legs for a while.  Then we got back on the road and drove through Illinios, Kentucky and on to Nashville, TN.  We arrived in Nashville after 10pm, we had been on the road for 10 hours, and we checked into the Drury Inn.  The girls were excited because i told them we could swim before we went to bed, but the pool was closed by the time we got there :(

So we drove over to an IHOP and had breakfast for dinner and then fell into bed exhausted!

The next morning we got up really early and enjoyed the FREE breakfast!  We drove out of Nashville heading east through Knoxville and Ashville, down through the beautiful Smokey Mountains!  Next time I wish we could spend more time on the journey, but we were in a hurry to get to the boys! 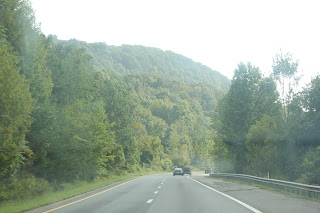 We enjoyed a brief stop in Knoxville, TN at a really nice Starbucks.  We ate bagel sandwiches which we had packed at home, with provolone cheese that was warm and melty from the car, it was super good!

We practically flew down the mountains and arrived in Mooresville, NC by 2:30pm and went straight to the hospital!  It was surreal walking into that hospital knowing we would be walking out with at least one baby! 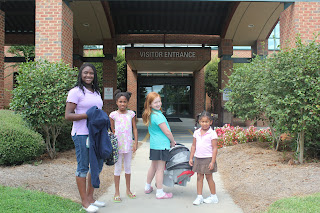 We were able to all go right into C's room where she was waiting with both boys!  It was so exciting for everyone! 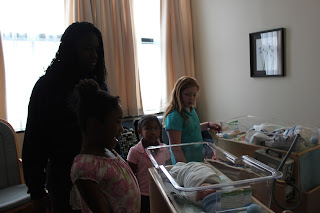 Seeing them in person for the very first time!  The girls were a little shy at first, but then they slipped right into big sister mode! 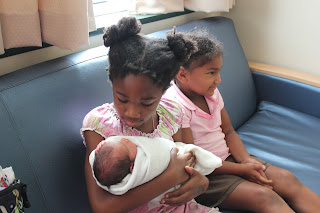 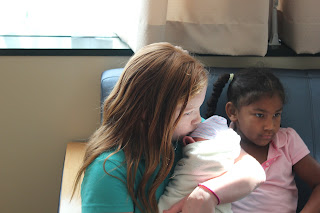 While C signed the paperwork with her attorney, I went into the nursery with Beckham to do the carseat stress test.  He passed with flying colors and they were ready to send him home with us.  Then I had to bring Hudson back to the nursery as he had to stay a couple more days *sigh*.  I was so sad, but I knew he would be fine and it wouldn't be for much longer. 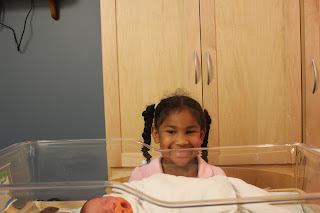 Miss Ava is so excited to be a big sister!  She keeps saying she will protect her brothers.  So sweet!

Well that was through Thursday September 6th.  We drove C home to her family and then drove with Beckham back to our hotel, stopping on the way to pick up extra diapers, wipes, formula and hot dogs (for the girls.)  We had a quiet first night in our hotel room at the Hampton Inn.  Everyone there was so sweet to us.

The next day we went back to the hospital at nine thinking we would get to pick up Hudson, but the doctor wanted him to stay just one more day, so back we went to the hotel again.  I will post next about our hotel and the staff there, and other fun things we did in North Carolina in my next post.
Posted by maureen at 5:45 PM