Before I go into the big reveal...

I have to tell you what has transpired in the last week.  Katy and I have been doing some serious planning and shopping.  We made meals that we froze ahead of time, made lists of the girls outfits for my son to read so he can just hand them clothes.  I was even thinking of putting each girls outfit for each day in a gallon ziplock bag and labeling it.  I want NO drama while I am gone!  I just want to be prepared.

So, we have been working to get this all done so Katy and I can fly away to meet the birthmom and go to the doctors with her and spend time with her, etc.  Well, last Sunday she had to go to the emergency room, she had some bleeding and was worried.  Everything is fine, she had a sonogram and the twins are fine and healthy and the doctor said they are growing great and big!

So she texts me that she is fine but she happened to study the sonogram and was able to discuss with the Tech what the sexes are.  So she has been teasing me all week about this and really driving me crazy because I just want to know!!!

Then yesterday my wonderful son calls me to let me know he has an interview for a new job...and by the way he got the job and they asked him when he can start and he tells them right away!  Aren't I happy for him??!!  NO!!  I remind him that he is supposed to stay with the kids next week, "Oooops!"  He says!  What?

So we had to cancel , or should I say reschedule our trip out there until June, because my Mom will be here in June for 2 weeks, for the girls Dance Show.  So she suggested we just go then instead. 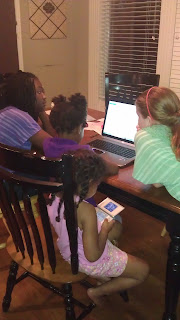 So I call the birthmom and tell her we won't be coming out there until June and she suggests we Skype so she can give us the surprise of what the sexes are now!!  So we did!  It was so much fun!!  Here are the girls waiting for her Skype to call us.  I guess Ava Marie was not as excited as the rest of them.


So all I have to say is that I am really excited, I have been waiting to find out what we are having so I can start to plan...which for me is the really fun part!!  And also so I can start picturing their little faces and to pray for them by name.  Oh I am so blessed!  So here is a little picture from pinterest to let you know that....

Can you believe it?!  In my pretty pink world we will now have twice the testosterone!  And we are all thrilled!  And the best part...I have nothing!  I will need so much!  Except the double stroller, I actually already have one of those, but otherwise we will be on the hunt for everything from clothes to a new baby bathtub.  Yes, folks, I have a bright pink bathtub!  I think it is time to start the shopping!!

Hi! I found your blog through Kelly's Korner. You're an inspiration and I have never met you! Congratulations on the twins, I will keep your entire family and the birth mother's family in my prayers! I live in Lee's Summit, btw. Have a great weekend!

Congrats! I just found your blog from kelly's. We used to live in Shawnee, so I had to click on yours. And also, we are adopting too, but we just started the process!